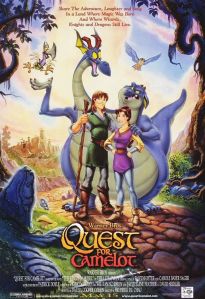 If you have heard that sacredly sublime song, “The Prayer,” you will be surprised to learn that this emotionally rich piece is from the same artistic team that produced Quest for Camelot, a work that belongs in Division III of animated films (or a couple notches down from Premier League, if you prefer). Made by Warner Brothers on the heels of the Disney Renaissance, it is a disappointing challenge to the latter’s dominance. Unlike Fox’s Anastasia, which borrowed the Disney formula to great acclaim, this movie falls short in every category.

With the artistic depth of a paint by number, the animation is better suited for afternoon cartoons. It fails to capitalize on the lush landscape or grand architecture that forms the backdrop of modern Arthurian retellings. The images lay limply on the screen, giving faint suggestions of another world rather than drawing the viewer into one. Similarly, each character lacks the subtle nuances that distinguish one role from another and all move with the grace of a marionette.

Casually inspired by Arthurian legend, the movie centers around Kayley (Jessalyn Gilsig), daughter of slain Sir Lionel (Gabriel Byrne). As proxy Disney princess, she is eager to trade her dull country existence for adventure and glory and gets her chance when wayward knight Ruber (Gary Oldman) steals King Arthur’s sword Excalibur. After he loses it in the Forbidden Forest, she sets off to recover it. But Ruber’s mechanical army, created with green Acme potion (in case you forgot this was Warner Brothers), is in hot pursuit. She is saved by “tall, rugged, handsome” Garrett (Cary Elwes), a former stable boy in Camelot who was blinded in an accident and now lives alone in the forest.

The absence of an underlying theme greatly weakens the story. The protagonists in successful animated features are simultaneously driven and challenged by some idea, whether it is status in Aladdin, outward appearances in Beauty and the Beast, or identity in Anastasia. It’s not clear what Kayley is out to prove once she’s left home and no longer has to feed the chickens. She isn’t really out to destroy gender stereotypes, à la Mulan, and relies on Garrett’s smarts more often than her own. Ruber, meanwhile, makes for a dull antagonist. He is a bully with bad hair, shredded nails, and a Cockney accent but no inner conflict to justify his bad behavior. Garrett is the lone character who elicts any sympathy, and is voiced movingly by Elwes, but his turmoil only comes in snatches.

A better soundtrack might save Camelot from such flaws, but the songs by David Foster and Carole Bayer Sager add little to character development or narrative exposition. And frankly, they are dull, save two songs which possibly make up for the whole misbegotten adventure – “Looking Through Your Eyes” and “The Prayer.”