Love may or may not be Taiwanese director Doze Niu’s answer to Love Actually, but it certainly plays that way. A crowded, multi-narrative picture that explores the ups and downs of love, it’s an elegantly packaged affair, much like that Rowan Atkinson number in Richard Curtis’s film. Niu corrals eight of Taiwan’s biggest, most beautiful stars, which includes himself and technically an actress from the Mainland, and sets them against a chic, cosmopolitan backdrop. It’s high gloss and vibrant hues all around, but if the glamour and good looks of its mostly young stars work to pull in its audience, they do little to heighten the drama; this is a movie first about polish and then about plot.

One of the more challenging situations involves someone heaving himself into a septic tank to prove his devotion to his girlfriend. Otherwise, there are few truly hard decisions to be made here, and the storylines tend towards the garden variety. An actress (Shu Qi) is arm candy for a director (Niu) but finds herself most at peace with a stuttering waiter (Ethan Ruan). He is brother to a cyclist (Ivy Chen) who’s just discovered she’s pregnant by her best friend’s (Amber Kuo) other half (Eddie Peng). The friend is daughter of the director, which brings us back to the actress, who is just ending an affair with an uptight businessman (Mark Chao). His inability to love is tested when he meets an estate agent and plucky single mother (Vicki Zhao) in Beijing.

There’s a real struggle between Chen and Kuo’s characters to do the right thing, once they figure out what that is, and the two actresses dig at the uncertainty that comes with abandoning oneself to love. Peng, however, flops around a bit looking hapless, a guise most of the actors here seem to adopt. Though they have proven their talent elsewhere, they are only as competent as their stories and Niu never really pushes his characters far enough.

Chao, for example, increasingly lays bare his vulnerabilities but never quite closes the emotional gulf between his character and the audience. It’s as if the messiness of despair and heartache just might overpower his tailored image, and so he holds back. The same is true for Shu Qi. Zhao flirts around a little more; her character is a harried woman more concerned with shuttling between her job and her son’s school than making sure every strand of hair is pinned in place. The only character that doesn’t seem to mind being immersed in the swill is a police officer (Wang Jingchun) who gets tangled in Chao and Zhao’s storyline. He has the benefit of not having to look like an Armani ad and comes off more human, and humorous, because of it. 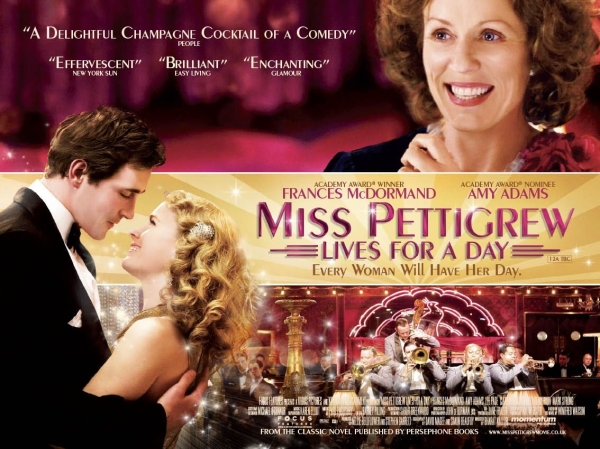 They don’t make ‘em like they used to but sometimes they come pretty close, and Miss Pettigrew Lives for a Day does its best to play up its classic screwball comedy roots in this 24 hour whirlwind of a story. Set during the eve of wartime London, the buoyant romance twirls and skips from one scene to the next thanks to a snappy script and a complementary acting duo in Frances McDormand and Amy Adams. The latter gives the film much of its levity, once again playing the part of a radiant whippersnapper who needs some gentle prodding to get her head from out of the clouds. McDormand, meanwhile, is the eponymous Miss Pettigrew, a mousy assistant who unexpectedly adventures through London’s high society.

Adapted from a 1938 novel, the film unfolds with theatrical precision. In one of the opening scenes, singer and aspiring movie star Delysia Lafosse (Adams) juggles two of her three lovers (Tom Payne and an underused Mark Strong) in one cavernous art deco flat. As she attempts to keep them from crossing paths, the perpetually unemployed Guinevere Pettigrew arrives as Delysia’s new social secretary and is unwittingly drawn in as her co-conspirator. It’s all a little Boeing-Boeing, and one can imagine the stage directions instructing actors to fly from one room to the next or shuffle half naked in and out of successive shots.

Things soon settle down but only momentarily because this quick moving farce wastes little time scooping its players up from one scene and depositing them into the next. It’s a high-end lingerie show hosted by Delysia’s friend Edythe Dubarry (the ever-steely Shirley Henderson), who is also no stranger to extra-curricular liasions which she carries on behind the back of her fiancé (Ciarán Hinds). As an alarmed Miss Pettigrew tries to extract herself from the Delysia’s topsy-turvy world, she can’t help but also be drawn in by the sudden material comforts her new position allows. An occasional patron of the local soup kitchen and a dowdy, stern nanny by trade, she tries to suppress her moral judgments about Delysia’s lavish lifestyle and adulterous entanglements and help her employer survive the day with dignity intact.

But a little discipline is exactly what the flighty girl needs and no more so than in the area of love. While Delysia tries to play two of her lovers off each another – one so she can score the leading role in a West End play and the second so she can live a life of luxury like the star she is destined to be – her true paramour is clearly the penniless piano player who can offer nothing except his music, his heart, and the dashing handsomeness of Lee Pace. It’s hard to dismiss Adams’s contribution to this film that is ostensibly about Miss Pettigrew. The actress literally glows in one point, and I am consistently surprised by how she bares her characters’ apprehensions without losing their bright-eyed innocence or joie de vivre.

This isn’t to say that Miss Pettigrew or McDormand get sidelined. Rather, the two work in harmonic tandem. In a bit of a role reversal, the titular character starts off more than a little bewildered by her sudden circumstances, unsure if she’s stumbled onto a patch of good or bad luck. It becomes clear though that she’s the only one thinking straight, and McDormand, neither too matronly nor condescending in this role, draws the movie back to reality. There is plenty of fun and frivolity, but it all happens under the long shadows of war, and there is just enough seriousness to blow away the excess froth.

“If I Didn’t Care” by Amy Adams and Lee Pace: