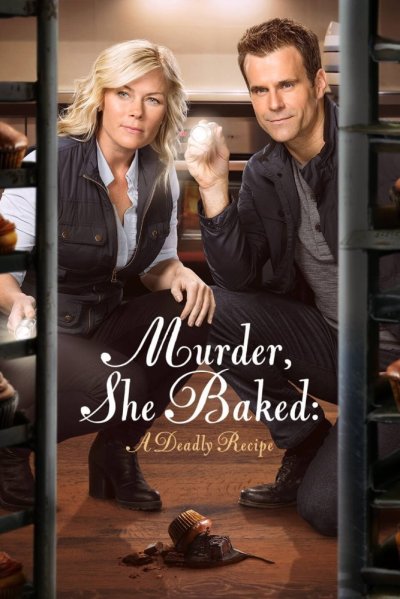 Hallmark’s Murder She Baked series has its deadly recipe down all right. Local cakes and cookies maven, Hannah Swensen (Alison Sweeney), solves another murder on the mean streets of Eden Lake, partnering with Mike Kingston (Cameron Mathison), police detective and love interest. She doesn’t end up on the suspect list this time like she did in A Peach Cobbler Mystery, but her brother-in-law, Bill (Toby Levins), does when his opponent in the upcoming sheriff’s election is bludgeoned to death.

He’s not the only one who has it out for the sheriff (Ty Olsson), who didn’t exactly win friends and influence people with his hostile personality. The investigation uncovers a few others who might have clubbed the man as he stood in the street eating cupcakes, including another officer (Jesse Moss) and his wife (Hannah Pederson) and his not quite grieving widow (Venus Terzo). Additionally, a shady car theft ring has citizens rattled, and there are indications it all may be connected since this was the last case the sheriff worked on.

A Deadly Recipe is low-key as far as these things go. Despite a high profile murder and Bill’s potential involvement, the movie isn’t all that gripping compared to the previous episodes. Blame it on the lack of baked good in the title or the easily solvable crime – anyone who watches enough murder mysteries can guess the real culprit. Hannah’s hemming and hawing over two potential suitors is also getting tiresome. Besides Mike, dashing dentist Norman (Gabriel Hogan) vies for her attention as well. We’ve already had three movies to mull over which guy would be the better match, and it’s time that girlfriend just got on with it. At least the storyline line would have move in an exciting new direction.

Lisa Durupt continues to be a bright spot though. As Hannah’s pregnant sister, Andrea, Durupt brings an Ellie Kemper-like quality to her character. A bit chirpy, she endears every time she appears onscreen. Sweeney, however, is more muted this go around, probably because she’s not given much new material. She does get a chance to save the day even when Mike handles her with kid gloves, all for the sake of safety of course. It’s nice to see homegirl finally own her crime fighting detective skills, potential overbearing boyfriend be damned.