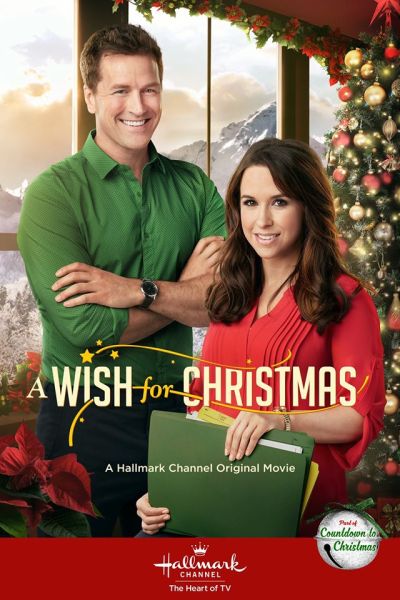 My wish for Christmas is for Hallmark to invest in solid holiday entertainment, movies that tell heartwarming stories we don’t usually hear, e.g. no getting stranded with hot guys, no wishing for hot boyfriends, no magical hot Santas (yes on the hot ghost though). I also wish for homemade Christmas cookies and a real, pint-sized tree, but I don’t think I’m getting any of those because it’s still 2016 and that’s how this year rolls. So for the time being, it’s back to my traditional December pastime – watching holiday movies while drunk revelers party at the corner bar outside my flat.

Surprisingly, I like the conceit of this latest TV romance. Hallmark looked deep into my soul, probably through my webcam, and determined that I’m sometimes a pushover, which is exactly how Lacey Chabert’s character describes herself. Sara, a web designer at a small company in Chicago, knows she needs to stand up to others, otherwise, she’ll be getting everyone’s morning coffee and ceding her ideas to her skeezy boss for the rest of her life. When she gets a wish from an office Christmas party Santa, she decides without hesitation that she wants courage, and I rejoiced for us both.

It didn’t last though. Sara does immediately find herself infused with daring and says some things that need to be said – to her best friend, to her skeezy boss, to her hot boss. She manages to take back credit for a project to improve a client’s online shopping business, earning her a trip to Seattle with hot boss (Paul Greene) to pitch the idea. At first, she’s taken aback by her own boldness but she likes this change and so do the people around her. Finding one’s voice, she discovers, earns you a lot more agency and respect. But there is of course a magic Santa and a catch. In 48 hours, her wish wears off, presumably leaving her to stumble back home in stockings while kicking bits of pumpkin.

If the threat of a return to passive Sara loomed larger, I might have been more invested in the story. Girl is on fire with all that confidence and I don’t want her to lose it. Chabert, who I’m generally indifferent to, lights up when her character’s laying it in to all the people who have taken advantage of her for years. But just when you think that’s the path they’re taking, the plot veers down another road. Soon the focus shifts from newfound boldness and introspection to the romance between Sara and her hot boss, Peter, and how she helps him overcome his own issues.

Her pressing timeline isn’t forgotten, but her transformation takes a backseat to Peter’s family problems and his need to reconcile with his father, whom he hasn’t spoken to in years. Sara and Peter’s business trip also becomes a measure of how his company is doing. That Sara’s fearlessness, and sometimes recklessness, is used to help and change others for the better carries with it a nice Christmas message, but it’s also not as inspirational as seeing her own her new personality. What would have really made me feel good was more of her sharp tongue and demand to be respected.

Watch a preview here, from the Hallmark Channel website.