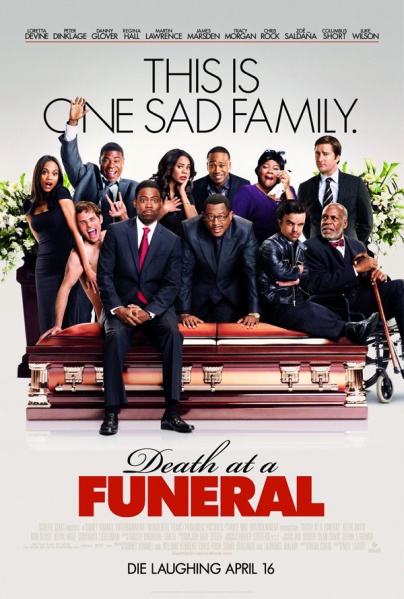 My sophomore English teacher allowed us to endlessly rewrite our essays for a higher grade, and once, after multiple drafts yielded no higher than a B+, he told me I should learn when to stop, because sometimes you can’t make something better no matter how hard you try. The feeling goes for Death at a Funeral, a slavishly faithful remake of the 2007 British farce. An outrageous comedy of errors no matter what side of the Atlantic it’s set, the script always seems to be a few steps ahead of the actual film. The plot, about a patriarch’s funeral gone horribly wrong, certainly provides material ripe for laughs, but the humor never quite lives up to the high stakes.

Still, this American version goes down a little easier, perhaps because I braced myself for disappointment but mostly because of the cast. Featuring a hodgepodge of distinguished performers, well known comedians, and young upstarts, they are more comfortable with the material, attuned to the fine balance between pure wit and physical comedy. There’s also a chemistry that’s missing from its buttoned-up predecessor. Robert Ebert wrote that the actors “work together like a stock company,” and it’s this ease of handing off lines and looks that keeps the show running.

Comedian Chris Rock has straight man duties this time and orchestrates the proceedings as Aaron, the eldest son of the deceased. The funeral is to take place at the family home, and as friends and relatives converge, things get increasingly out of hand. The arrival of his brother, Ryan (Martin Lawrence), a successful author, stirs up feelings of jealousy since Aaron’s still living at home and has only a handful of pieces published in Jet to his name. Cranky Uncle Russell (Danny Glover) just wants to get things over with and eat his potato salad, much to the annoyance of Norman (Tracy Morgan), who’s on chaperone duty. Then there’s the cousins, Elaine (Zoe Saldana) and Jeff (Columbus Short). She and her boyfriend, Oscar (James Marsden), want to announce their engagement to her disapproving father (Ron Glass), but nerves get the better of him. She accidentally gives him a hallucinogenic concocted by her pharmacy student brother, resulting in a string of embarrassing moments, each one more extreme than the last.

This branch of the family was my favorite to watch. The actors carry off an aura of cool restraint even as everything crumbles around them. Marsden is the exception as his role liberates in more ways than one. The characters of Aaron’s wife and mother, on the other hand, are further reduced to bit players. Regina Hall doesn’t have much to do except complain about not having sex with Aaron while Loretta Divine doesn’t do anything except complain about her kids not having sex. Peter Dinklage returns as a mysterious guest with a shocking secret. His character, and the manic fallout that accompanies him, fits more snuggly in with the rest of the chaos. With some of the others pulling their weight in equal measure, he doesn’t seem to be the one joke bombshell that the movie builds up to.

But if this incarnation of Dean Craig’s story works better, it still doesn’t exactly work. It promises far more than it delivers and relies on absurdities that border on juvenile. Someone’s hand gets caught on the wrong end of a delicate bowel movement. There’s a minor kidnapping episode that gives license to homophobic and other offensive jokes. Another character tries to seduce someone who might be an actual juvenile, though here Rock throws in a deadly quip about juice boxes. There’s potential for this to have been a smarter, funnier remake, but with the plot and characters virtually unchanged, it’s just an unnecessary one. 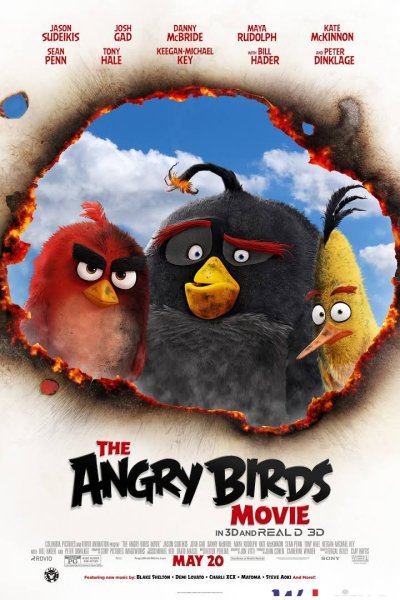 The angry birds in question are flightless avians who just don’t see the point of flying since life is already pretty good on Bird Island. And like its subject, The Angry Birds Movie never takes flight, content to laze about and scoot by on the bare minimum of a plot. It’s forever positioned to prove itself worthy of its feature film status but ultimately fails to reach any new creative heights and escape its smartphone game origins.

There are things to enjoy, namely a cast that features some of today’s best comedic talent. They are the ones who give life to a lifeless story, reverse engineered from a game that to my limited understanding is really just about birds and pigs hurling themselves at each other. The movie tries to elevate this feathery beach ball match by filling in with backstory, starting with Red (Jason Sudekis), a party clown with anger management issues. His problems may stem from his youth as an orphaned bird bullied for his big eyebrows, but that’s something for him to work out during his court-mandated classes to deal with his temper. Those are led by new age guru Matilda (Maya Rudolph) and are a gathering place for an eclectic bunch that includes speedy yellow bird, Chuck (Josh Gad), explosive black bird, Bomb (Danny McBride), and an oversized grunter (Oscar winner Sean Penn, grunting).

It takes awhile to establish these characters, and the process comes off as a desperate attempt to shore up the story with engaging personalities. To their credit, Sudekis and Gad make the time pass more enjoyably and compensate for the lack of visual and artistic flair. There are many sarcastic jokes that will fly over the heads of children, but generally the actors add a welcome if caustic edge to their characters, who are angry birds after all.

This set-up eats into the main part of the story, however, and the actual conflict gets pushed to the second half of the movie. It isn’t until the green pigs, who look like trolls dregged out of a swamp, appear that things really get going. King Mudbeard (Bill Hader) introduces himself as an explorer, eager to establish friendly ties with the birds. Since they have never left the island, they accept his entreaty, fascinated by his stories and marveling at the new wonders he introduces. It’s a world reborn with slingshots and balloons. It’s also an unexpected allegory, albeit not a very exact or deep one, of colonialism. Of course this is all a rouse, and the pigs are really out to placate the birds so that they can steal their eggs. And once that happens, well, there’s only one thing for Red and his friends to do and that is to slingshot bomb themselves over to pigland.

The plot is a tortured explainer to the game, a build up to the point where angry birds start hurtling through the air. Once the battle is on, the movie goes into game mode with one character shooting pink fireballs out of her bum and another one setting off an explosion that takes out a whole tower block of pigs. The Mighty Eagle (a funny Peter Dinklage), available for 99 cents purchase, also swoops in to help save the day. For those who don’t have the app, it’s your chance to see what you’ve been missing out on, and for those who do have it, I wonder if it isn’t more enjoyable to just play the game. 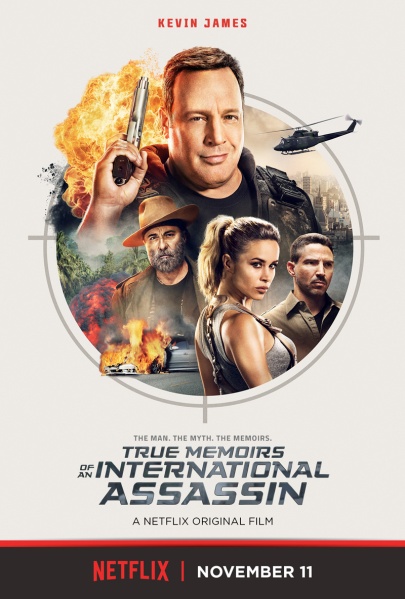 Before he can figure out how to talk his way out of this mess, he finds himself in a much more precarious situation. He’s kidnapped by some Venezuelan rebels and taken to that country where any number of people believe him to be an actual assassin and want his services. They all mistake him for the Ghost, the main character and super killer in his novel, but Sam can’t even stand up to his bullying coworker much less rebels, gangsters, and politicians. Initially he’s called upon by El Toro (Andy Garcia) to murder the president (Kim Coates) so that he and his fellow revolutionaries can stage a coup, but then Sam is intercepted by a Russian gangster (Andrew Howard) and a general (Yul Vazquez), all of whom also want his guns trained on the other parties.

Meanwhile, the CIA (Rob Riggle, Leonard Earl Howze) know he’s in Venezuela and that he’s being set up to murder the president, and nearly every other important player, but they’d rather just let things work themselves out and amuse themselves in the process. This basically describes every role Riggle plays, by the way. Sam soon finds out that his only friend is DEA agent Rosa (ass-kicking Zulay Henao), a bit of a lone shark trying to do good by her country and that of her parents.

The movie aspires to be a solid action comedy, and there are certainly elements of both. I can see why some might not like the back and forth between Sam and everyone else who wants to hire and/or kill him. It’s repetitive and predictable, like watching a multi-player ping pong match between amateurs. But I enjoy the fake outs and layers of deception, which force Sam to make some calculations about who he should be loyal to, or at least who will allow him the best chance of getting out alive. My favorite supporting character is Juan (a cool Maurice Compte who incidentally reminds me of a cool Martin Compston), El Toro’s lieutenant with whom Sam has a complex relationship.

A lot of his motivation comes from the fact that he’s a just a guy who longs for excitement and gets it the only way he knows how – by writing about it. The main joke is that he lives vicariously through his character. The editing jumps between his real life and the one in his imagination, especially in the first half of the movie. That gets distracting and tiresome pretty quickly. The initial disconnect is supposed to be funny, and it is mildly amusing, because most people aren’t going to suspect Kevin James as an international assassin. Mall cop, maybe. But as the situation escalates and fiction and reality become more entangled, the audience is asked to suspend our disbelief until we’re practically floating on air. Somewhere in the second act, the comedy wears out and the movie becomes nothing more than light action, lots of firefights with none of the consequences, at least not for our main heroes.

When Sam does take control of his life, however, the movie dives into a mucky post-modern minefield. He gets to live out the ending he wants, and I’m not going to root against a guy who desperately needs and gets some agency. But I’m also not terribly impressed that Sam Larsen played by Kevin James is the kind of guy who needs to feel empowered, especially when his getting a handle on things means gunning down shady Venezuelans and rescuing the hot girl, who until the end of the movie seems to have been on top of the situation. That this is a film about both living the stories we want to tell and giving voice to them, maybe let’s not go with the genial middle-aged white dude.