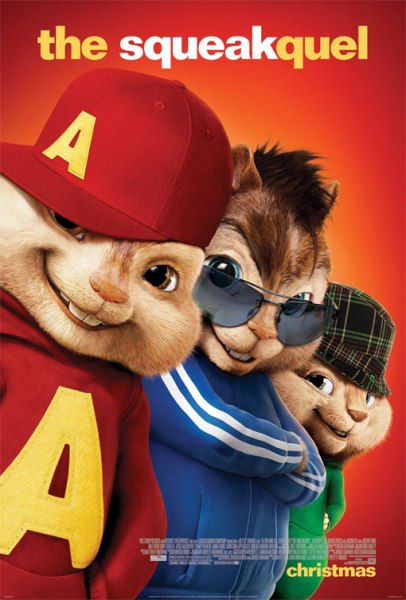 It’s not a popular opinion, but I’m here to say that I like Alvin and the Chipmunks: The Sqeakquel. I’ll even go so far as to say that this movie improves on the first one, which I’ll also admit to enjoying. And while this isn’t going in the pantheon of kids flicks, it’s funny and engaging enough for those little people who would get a kick out of singing, dancing forest rodents.

One noticeable improvement is the sidelining of Dave Seville (Jason Lee), a major character in the Chipmunks tale. He is the adoptive father to and occasional manager of Alvin, Simon, and Theodore (Justin Long, Matthew Gray Gubler, Jesse McCartney). When we last saw him, he was a struggling songwriter who sheltered the brothers from Ian (David Cross), an evil record producer with no respect for child labor laws. Lee has a genial onscreen presence and balances out his hyperactive costars, but he’s also as exciting as a bottle of cold milk. It’s not that he seems unhappy to be here; it’s more like he’s not really sure what he’s doing here.

Enter Zachary Levi, giddy nerd and actual Disney prince. He plays Dave’s irresponsible nephew, Toby, who comes into the picture after Alvin’s concert stunt lands Dave in the hospital. Toby becomes the boys’ temporary caretaker, which is to say the guy who happens to live in the same house for a short while but who spends most of his time playing video games. It’s not a challenging role and though he has a minor romantic storyline, the character’s largely underused and underdeveloped. Levi makes up for this where he can and is instantly comfortable with the goofy, childish tone and material. He doesn’t play down to the under-10 crowd but right to them.

The real stars of course are the Chipmunks, and they decide to take a break from their music career to get an education. They quickly find that navigating West Eastman High is harder than navigating an arena tour, and Simon and Theodore have an especially rough time fitting in. Even with the support of their school principal (a perfectly game Wendie Malick), they endure a good amount of bullying; they are tiny chipmunks, after all. Alvin deflects some of that negative attention when he joins the football team, but this only creates a rift between the brothers. Further rivalries appear when the Chipettes (Christina Applegate, Anna Faris, Amy Poehler) enroll and steal the Chipmunks’ thunder. The boys are upset that the girls have gained their own fanbase, and they must resolve their differences with a sing-off. The winner gets bragging rights and the chance to represent the school in a competition for more school funding.

When it comes down to it, the story is not unlike the average Disney Channel Original Movie about teens trying to be cool and true to themselves. The difference is some truly adorable CGI chipmunks. Say what you will, the animation and the voice acting are all wonderfully realized, and nothing makes me smile like tiny Theodore wanting to curl up next to whatever human happens to be his guardian. It’s not all saccharine stuff though, and the series has an unsettling mean streak. Putting them in a high school environment allows the writers to get away with jokes about makeout trains and pole dancing, but why the hell do you need jokes about makeout trains and pole dancing in a movie about animated chipmunks? Kids will love the physical humor, but the snide retorts don’t serve anyone. Theodore and Eleanor are mocked for their weight and Ian threatens to barbeque the Chipettes. Sure, the little guys win in the end, but the bullies don’t change their ways; they just get caught.