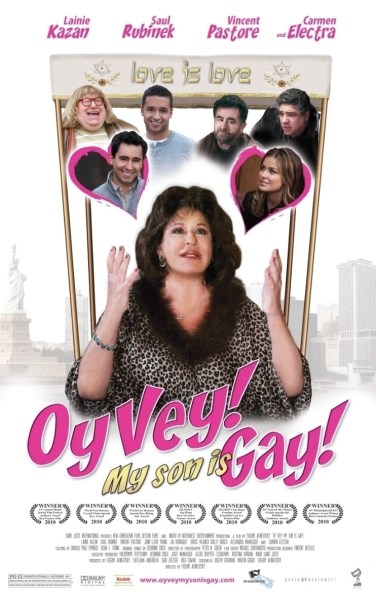 You pretty much get what you expect with a movie titled Oy Vey! My Son is Gay!! The film works in broad stereotypes – about Jews, gay men, Italians – with occasional moments of surprise and reflection. The most interesting thing though may be the way this movie, released in 2009, comments on our own times. I won’t say that society has come a long way (see all of 2017), but it is reassuring that a gay couple wanting to adopt a child generally does not provoke raucous street protests. At the same time, the central conflict, first of a son coming out to his parents and then of their struggle to accept him, remains.

John Lloyd Young of Jersey Boys fame plays the titular son, Nelson Hirsch, a cherubic business type who lives with his artist decorator boyfriend, Angelo (Jai Rodriguez). Since Nelson hasn’t come out to his parents, his pushy mother, Shirley (Lainie Kazan), assumes he just hasn’t found the right woman. She tries to set him up with every Jewish girl she can find, and when she mistakes Nelson’s decidedly non-Jewish centerfold model neighbor (Carmen Electra) for his girlfriend, she thinks her biggest challenge will be accounting for the mixed relationship to her congregation and friends. Of course, Nelson kiboshes all that when he comes out to his parents during his cousin’s wedding.

I admit that Young was the reason I watched this movie, and that I was disappointed that his role was so limited. He and Rodriguez don’t have much of a relationship on screen. They share a few intimate moments but mostly cycle between states of exasperation and forlornness as they deal with Nelson’s reluctance to come out to his parents and the Hirshes’ less than enthusiastic embrace of them. They sneak in some sweet smiles, but not enough to satisfy this rabid fangirl.

Neither is Shirley the main focus. Her outsized personality, thanks to Kazan’s presence, dominates the first half of the movie, but once reality sets in, it’s father Martin (Saul Rubinek) who struggles. Rubinek puts in the film’s best performance, a diligent associate at his uncle’s business who you sense would rather be concerned with the line of succession at work than with his son’s sexuality. But since the latter weighs so heavily on everyone else’s mind, he gets caught up in ridiculous battles over manliness. First he and his wife argue over which family line carried a dominant gay gene, and then he tries to one up Angelo’s father (Vincent Pastore) over who had the more macho childrearing skills.

The exchanges are cliché and rarely get at real feelings of pain and acceptance. The characters don’t break out of the generic box they’ve been put in so there’s no one to faithfully carry the emotions forward. The movie finally stumbles into an unnecessary adoption plot to tidy things up, but that comes on a bit sudden and out of left field. The resolution feels like a cheat. Then again, so does the rest of the movie.