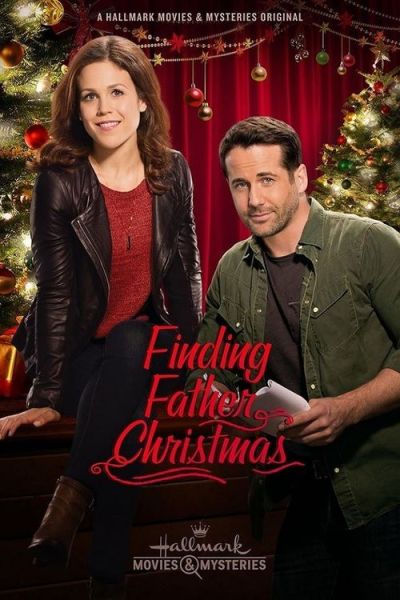 I recommend award winning romantic comedies to my mom (e.g. The Big Sick), and she recommends Hallmark Christmas movies. I’m pretty sure that’s not a fair exchange but can’t complain – mothers know best. So for the last few weeks, she’s been telling me to watch Finding Father Christmas. After dragging my feet per usual, I’ve dutifully obliged, and it’s true that mothers do know best. This movie is one of the highlights from last season, and so far it’s proved to be one of the better titles on my list this year. Nice going, Mom.

It’s appropriate to thank her too because the movie is about a woman’s relationship with her mother. Miranda (Erin Krakow) has never recovered from the trauma of losing her mom, a stage actress, during a performance of The Christmas Carol when she was a child. She hates the holiday and has done her best to avoid the festivities ever since. But when she discovers an old picture of Santa Claus and a young boy in her mother’s suitcase, she sets off to find out why it was so important to her, hoping also that she’ll get some answers about her own past, including the identity of her father.

The journey takes her to a tiny town in Vermont where Miranda immediately befriends the owners of an inn and their son, Ian (Niall Matter). They help her inquire about the photo, which was taken at a long defunct studio. In the meantime, there’s nothing to do but soak in the Christmas atmosphere and warm up to the people around her. How could she not love this place? People just invite her to join parties and offer her cups of hot chocolate. Sleigh rides are a thing, and when she steps outside, she’s surrounded by snow and mountains. Makes me wonder why I don’t jet off to a random picturesque New England town.

Eventually Miranda does figure out the mystery of the photo, but what to do next proves equally difficult. If she shares what she knows with her new friends, she could be exposing them to family secrets they all want to keep hidden. But if she keeps everything to herself, she’ll just continue to be miserable. Luckily she can confide in Ian. Not only is a lawyer on the downlow and a superb listener, he’s also really good at chopping wood. What a man of many talents.

There are a few things Finding Father Christmas does differently than the average Hallmark movie that make it more enjoyable. It’s not primarily a love story, and that is refreshing. I’m here for all the other mushy family feels and welcome a Christmas movie that doesn’t remind me of my perpetual spinsterhood. Also, while the movie is very predictable, some of the characters still manage to act in unpredictable ways. Wendie Malick has a memorable part as the matriarch of a well known family to whom Miranda grows close. She has a crucial scene that is both surprising and very touching. Malick along with the two leads, Krakow and Matter, ground the movie with their acting, which mirrors the quiet of their surroundings. There are no jumpy, jittery, stressed out women here. Nor is Miranda consumed with loneliness due to her relationship status. Krakow conveys her character’s strong sense of loss without making her pitiful. Altogether, it’s a story that complements a peaceful December evening.