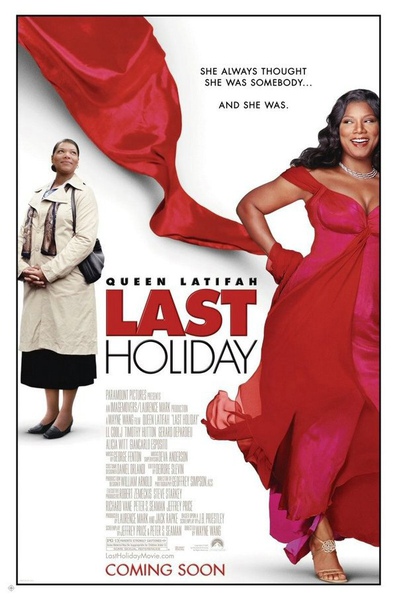 A movie that leaves you with a smile on your face has something going for it, no matter how predictable or sappy. Last Holiday fits snuggly into the holiday lineup, surprising with an affectionate story and likable performances. Though the pacing and tone are sometimes uneven, the film has its charms, and it’s easy to cheer for star Queen Latifah. She adds great warmth and generosity to Georgia Byrd, a wallflower who dreams big while working in cookware at a large department store. When a doctor misdiagnoses her, she quits her job and, thinking she has a terminal disease, flies off to Prague so she can live it up at the Grandhotel Pupp during her final weeks.

The story can go many ways, and at times director Wayne Wang opts for the slapstick route. But the film is least funny when it tries to be very funny, and a few of the scenes used for comic effect seem overly long and out of place, for example, when Georgia gets her diagnosis or when she crashes into every skier on the mountain. The scene where the HMO rep tells her to appeal their decision to not cover a $340,000 operation, however, is hilarious. Last Holiday is far more effective with its smaller moments. The talented cast doesn’t need noise and distraction to grab attention since this isn’t a story about a lonely woman and her crazy last adventure.

Well, it is, but it’s also very much about a woman who is always nice to others and who finally decides to be nice to herself. For one reason or another, Georgia hasn’t given herself permission to pursue the things she loves. She keeps a scrapbook of possibilities, which she fills with pictures of gourmet dishes that she cooks for the neighbor’s kid and faked wedding pictures of her and her coworker crush, Sean (LL Cool J). Of course, this life she imagines for herself is far different from her reality of Lean Cuisine and awkward encounters at work, and only when she thinks she’s about to die does she let herself feel alive.

The idea is cliché, and the movie cycles through routine scenes, like Georgia smashing her boss’s phone, upgrading herself to first class, and shopping for the right “European look.” What makes things less mundane though is the simple way in which she delights in these pleasures. She gives a self-satisfied chuckle when she decides to order everything on the famous Chef Didier’s menu, pleased that she’s doing something that she’s always wanted to do. I love that Georgia enjoys things for herself and isn’t out to satisfy anyone or make an impression.

And yet she still manages to do just that. It doesn’t take long for the hotel staff and guests to take notice. The employees, unaccustomed to their moneyed guests treating them as anything but the help, find a kindred spirit in Georgia, someone who is both generous with her tips and who will stand up for them when they are bullied. Likewise, the Americans in her company are won over by her sincerity and start to reconsider their own priorities. The group include her senator (Giancarlo Esposito) and congressman (Michael Nouri) as well as Matthew Kragen (Timothy Hutton), the owner of the store where she works, and his assistant and lover (Alicia Witt). Kragen is suspicious of Georgia, which leads to some scheming on his part to discover her true identity.

For the most part though, her interactions with others shine a little light on things. The film avoids grand proclamations about seizing the moment since, well, Georgia’s not dying, and instead offers reaffirming touches of camaraderie. My favorite scenes are those between Queen Latifah and Gérard Depardieu, who plays Didier. They’re such an unexpected pair, and rather than mining the relationship for comic value, we get a quiet, supportive friendship. It’s perfect for the holidays, or any time.