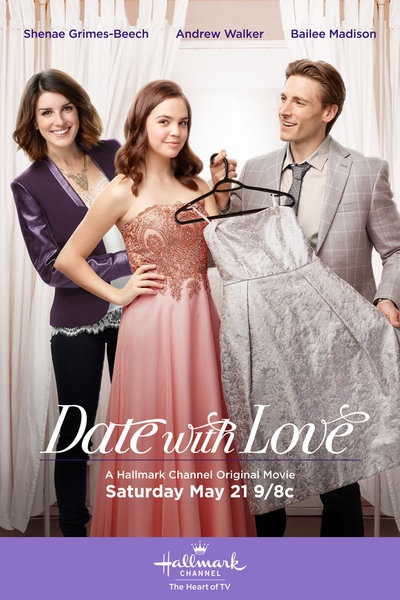 There’s nothing Hallmark won’t try, except promoting people of color as leads, featuring LGBTQ relationships, casting actors with disabilities, so that means they’re definitely willing to take on internet fads that should die. Date with Love is Hallmark’s twist on promposals, those viral videos posted by high schoolers hoping to win a date with an older, richer famous hot person for prom, a strange, strange American ritual.

David Rogers (Quinn Lord, possibly the brother-son of Frankie Muniz and Grant Gustin) is that guy, the one who isn’t one of the cool kids but who really wants to join their number. Since prom is coming up and he’s been rejected more times than he can count, he takes the next logical step and reaches out via YouTube to Hollywood star Alex Allen (Shenae Grimes-Beech). He hopes that everyone will accept him once he has a popular and beautiful actor by his side.

Everything about this idea is horrible. Not only does David want to use Alex to prop up his own self-worth, he also ignores his best friend, Heidi (Bailee Madison). She’s been crushing on him for years, and though she says she doesn’t want to participate in that superficial prom shit, she just wishes he would ask her out. Alex, meanwhile, or rather Alex’s publicist (Andrea Brooks), thinks using an unpopular kid’s gamble to help her client’s career is a great idea. Thankfully Andrew Walker is here to distract from this unethical mess. Vincent, the school’s English and driver’s ed teacher (budget cuts are a bitch), tries to bring everything back to balance. He counsels his misguided student while also bringing some normalcy and calm to Alex’s life.

It’s a delight to see Grimes-Beech, whom I watched on Degrassi when I was way too old to be watching that show, and her glow-up is one I’m still waiting for. Alex isn’t a memorable character, but she is equal parts funny and compassionate, and sometimes that’s enough for Hallmark. I loved seeing her try to guide Heidi through this confusing and often frustrating part of a teenager’s life, and I wish the relationship between those two had been the focus. Of course, I’ll never object to anything with Walker, whatever the pairing, but Alex and Vincent’s romance is more of the same. They bicker, then they reflect, then they take back their words, and then they realize they belong together. Can we not get a different dynamic going, something more along the lines of Alex and Heidi?