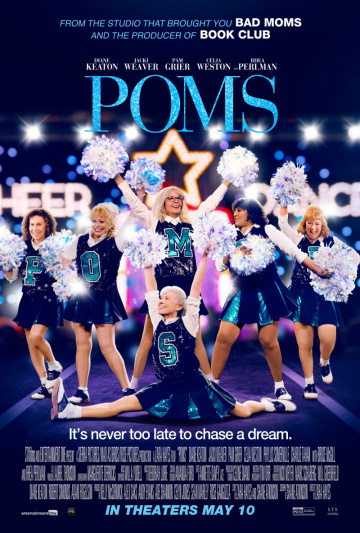 Poms charges forth with the determination of a high school cheerleader at the season’s first pep rally. It has a message, proclaims it loudly and proudly, and strives to hit every mark. But as sometimes happens, an angry principal commandeers the mike, the trombone player throws up, Becky’s uniform comes undone. Or maybe that was my high school. In any case, this film about retirees forming a cheer team is as routine and predictable as they come. Diane Keaton leads an outstanding cast, but there are few chances for them to shine with this lackluster script.

Keaton plays Martha, a retired school teacher who is not long for this world. It isn’t because she’s getting on in years but because she has cancer and refuses treatment. She plans to sell her stuff, drive down to a retirement community in Georgia, and die, which isn’t the sunniest way to go but then Martha’s not a sunny person. She has no interest in joining a requisite club and passes up the chance to befriend the community’s security chief (Bruce McGill). Her hopes of slipping away quietly dim too when she meets her neighbor, Sheryl (Jacki Weaver), known for dropping by uninvited and hosting rowdy poker games in the middle of the night.

A shared disdain for petty regulations and the resident mean girls brings the two together though, and they propose to start the community’s first cheerleading team. It’s not well received, and queen bee Vicki (Celia Weston) takes particular issue with the group, which she finds ludicrous and a tad obscene. That doesn’t stop them from recruiting members and yes, via a graceless, mildly comic try-out montage. Some are like Martha, there to satisfy an unfulfilled dream, some enjoy the workout and still others just want to stick it to their overbearing husband. Needless to say, coordination is a bit off and they decide to stick to moves that don’t send them airborne.

The feel good factor is certainly present in Poms, and it’s hard to root against the women for doing whatever they want, critics and less-than-limber knees be damned. The veteran cast bring a joy that projects even when their moves and the script do not. Keaton grounds the film, but Weaver is the real spark. Sheryl is wild without being silly. She substitute teaches for kicks and attends strangers’ funerals for the free food. It’s no wonder even the staid Martha would be attracted to her.

Outside of Weaver’s performance and a ringing message that it’s never too late to follow your dreams, however, the film doesn’t have much to show for. Martha can be a frustrating character, admirable for her tenacity but also confusing in her decision-making. We don’t know why, for example, she’s set her sights on this retirement community in Georgia when she loathes so much about it. Her reason for seizing this particular opportunity to be a cheerleader also seems thin. Other characters don’t fare better. I was excited to see Pam Grier in the cast, but apparently she’s just here to show off a leotard. Chloe (Alisha Boe) is frustrating as well, a teen cheerleader who switches allegiances whenever it suits the plot. I would have liked a more honest film, one willing to indulge in feelings of loss and fear that go deeper than seeing oneself in a viral video.