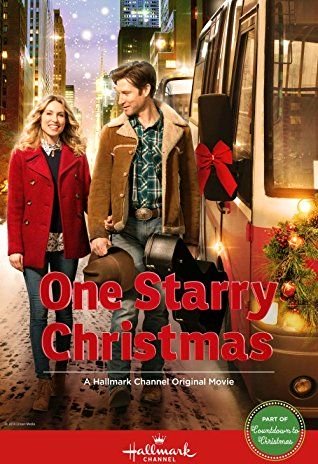 I wouldn’t normally hitch a ride with a cowboy I just met on a cross-country bus trip, but One Starry Christmas has me reconsidering. You don’t find guys as pure as Dale (Damon Runyan), a Texas cowboy who ends up traveling with Holly (Sarah Carter) back to her home in New York. Dale is spending Christmas with his brother, Bull (George Canyon), a rodeo star touring New Jersey, and Holly wants to surprise her boyfriend, Adam (Paul Popowich). When their bus breaks down, they go on a journey neither of them expected.

The movie is a delight, in large part because of the two main characters. They’re not cynical Christmas-haters of the sort you often see in these movies. Holly and Dale are the opposite, two exceedingly kind and hopeful people who, if there is any good in this world, deserve to be together. That’s why Holly should be running away from Adam, an ambitious lawyer chasing the high life. In fact, he’s hopped off to the city to finalize a job opportunity, leaving her alone as she defends her dissertation and awaits word on a prestigious astronomy award.

Holly’s attempt to reunite with her boyfriend gives her some clarity though. It’s obvious to everyone, including Adam, that she is a better fit with the guy who will drop everything to stargaze with her than one who doesn’t know the difference between astronomy and astrology. Certainly her parents prefer this affable stranger to the hot shot attorney with flashy connections.

Dale’s honest, plainspoken manners are also why I love his character. There’s no pretense to this guy, which is so refreshing. His old fashioned ways are respectful without being overbearing, and importantly, he finds Holly’s intelligence something to be celebrated instead of in competition with. One of my favorite scenes is when he takes in the sights of New York for the first time. He draws you in with wide-eyed wonder, and you can’t help but appreciate life as he does. All credit to Runyan, who at a glance could be young Canadian Mads Mikkelsen, that is Rogue One Mads and not Hannibal Mads. Now I guess lanky cowboy is also my type.

Holly, and Carter who plays her, is a breath of fresh air too, and I didn’t realize Hallmark was missing a cool astronomy hero until this character came along. What impresses me most is the way she shows off a strength that comes from kindness. Holly is smart and willful like many other Hallmark women, but she’s also just super nice. She doesn’t always have the answers and is sometimes at a loss over what to do, but she trusts her instincts and the good people around her and she always acts with the best intentions.

Basically, these are pleasant people, Adam excluded, and a casual Christmas with this group would be a dream. Even Dale’s brother, Bull, gets a memorable cameo in and adds to the atmosphere. Canyon, a country singer by day, serenades us all with a beautiful song about Wild Bill, camellias at Christmas, and true love. It’s a fitting cap to a lovely film.

“The Ballad of Wild Bill” by George Canyon: