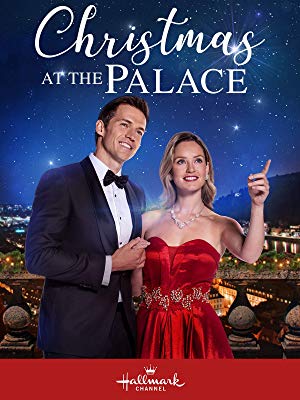 Christmas at the Palace has many things I love – figure skating, European castles, British dudes – but even I find it hard to get on board this royal-themed romance. The storytelling is a mess, the acting possibly worse, and the movie just doesn’t live up to its potential. Despite a gorgeous Romanian backdrop and the promise of a skating showcase, the film is dragged down by colorless characters and a curious disregard for details.

Thankfully Brittany Bristow and Nicholas Banks save it from disaster. The two supporting actors are a bright spot in this story about a king in need of a Christmas makeover and a skating queen who helps him achieve it. Bristow plays fellow skating star Jessica and Banks, the king’s right hand man, Nicholas. They light up when they’re together, infecting everyone with the giddiness of their new love, everyone except the moribund main characters. Jessica and Nicholas are far more fun to be around, and one wonders whether the film might have been livelier with them as the focus. The actors have a natural appeal, and even I found myself forgetting Banks’s brief but knavish turn as one of the Kingsman toffs. Bristow, meanwhile, is someone I never get tired of seeing. She always delivers a memorable performance and deserves more prominent roles on Hallmark. Cast her as the lead, cowards.

Merritt Patterson and Andrew Cooper aren’t doing anyone any favors, after all. They do the bare minimum in their roles as Katie, world champion skater turned choreographer, and King Alexander, the Christmas Grinch of San Senova. Katie finds herself putting together a last minute Christmas spectacle for the king at the request of his daughter, Princess Christina (India Fowler), who doesn’t want her dad to be known as a holiday grump. Patterson comes off as the better actor in that she actually displays emotion, but she brings little to her character. Katie is a passive presence, a pretty face that drifts in and out of scenes without much notice. I suppose that’s preferable to Cooper’s performance. While he may have some regal bearing, you might also mistake him for Eddie Redmayne’s brooding brother. No wonder the people of San Senova suspect their king is a stony Christmas hater. He never smiles and has the permanent look of someone who’d rather mope by a window.

The slapdash story also detracts. You’d think the writers at Hallmark would be able to write these things in their sleep, and…well, maybe that’s the problem. Maybe someone didn’t give this their fullest attention because apart from a plot outline, the story has a hard time moving beyond its basic premise. Somehow, Katie has to plan a Christmas Eve skating show, deal with a rink purchase back home in New Jersey, and fall in love. It’s a lot to deal with, which is perhaps why the movie doesn’t actually deal with these elements. I can understand compressed movie time, but choreographing a whole ass show, auditioning dozens of skaters, and teaching them the routine in thirteen days is a bit much. Also, Katie and Jessica’s dream of opening their own training center doesn’t really factor in until it’s needed to prop up the ending.

If there’s one thing the movie should get right, it’s the romance, but even this feels lazy. Sure, the skater and the prince fall in love. However, they don’t have strong moments over which they can bond. The general fear of failure that Katie and Alex and even Christina share could be better articulated through active conflict. Instead, the king and his daughter spend most of their time looking glum and avoiding life. The deaths of Alex’s wife and father, which could explain some things, never come to the fore. Meanwhile, Katie flits around making every excuse she can to stay off the ice. The couple do get some time to do Christmasy stuff, but because of the actors’ ennui, the tree buying and cookie decorating seem like pointless filler.

All this isn’t to say Christmas at the Palace is a terrible movie; I’ll probably watch it again next year. I had hoped that it would be one of the highlights of the season though. There’s no reason it couldn’t have been considering the storybook setting and skating, but what can you do when there’s budget and time and insurance to consider. Still, I can see why Jessica was so hype about doing the show. The flashes we do see are alive with possibility, akin to the performances in – and I will never stop hyping this underappreciated movie – A Nutcracker Christmas. This is me calling out Hallmark for not showing that film and for not recognizing artistry when it’s staring them in the face. (Also, stop putting Christmas trees on the ice. It’s a damn hazard.)