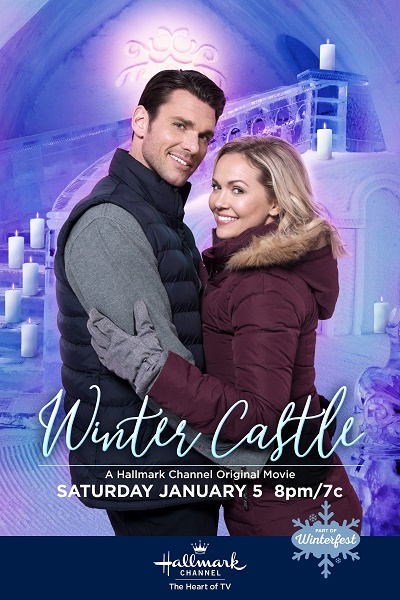 The best scene in Winter Castle takes place at the frosty ice hotel that is this movie’s main attraction. Jenny (Emilie Ullerup) and Craig (Kevin McGarry), whose couple name has to be Jenny Craig, are the maid of honor and best man at a wedding. They find themselves increasingly drawn to one another, but a potential romance is complicated by Craig’s plus one, Lana (Meghan Heffern). She’s the sort who comes in and gets in the way, only to leave alone at the end. For one moment, however, the inevitable looks less certain as Lana delights the wedding party with a lovely, loungy rendition of Someone to Watch Over Me. As Jenny and Craig’s jaws drop at this talent, you think that maybe Craig and Lana have a future and that Jenny will go home single and a little sad but not unhappy about spending a weekend with this guy.

Of course that’s wishful thinking on my part. The two end up together because why go for challenging relationships when you can take the easy way out? I like a happy ending as much as the next Hallmark viewer, but would it hurt to tackle an emotionally complex love triangle for once? The reason this scene is so good is that Craig has to make an actual hard decision between two impressive woman, and that choice, however it goes, will tug at everyone’s hearts.

But the movie sticks with the least complicated route, making it clear that Lana is not a good match for widower Craig. She doesn’t tell fantastical stories about polar bears to his daughter, Sara (Habree Larratt), and she can’t even manage the ice slide without hurting herself. Jenny, on the other hand, is a natural storyteller and rushes up behind the kids for another go on the slide. Yet beneath her cheerful exterior, the children’s book editor feels like a failure, having neither lived up to her dream of writing children’s books nor taken a long-discussed trip to New Zealand. Craig, for his part, has struggled to move on from his wife’s death. He finally seems ready to start dating again, if only he could figure out with whom.

My reason for revisiting Winter Castle, which premiered last year, is not to dig into Jenny and Craig’s issues though. The characters, while well-acted, are forgettable and the plot underwhelming. The wedding of Jenny’s sister (Melanie Mullen) and Craig’s best friend (Jon McLaren) hardly figures into the story. Instead, I gave this movie a second look because of Kevin McGarry’s eyes, fucking gems apparently. I know the man’s been around for awhile, but I put it down to favorable lighting in Winter Love Story and that longing glance in the When Calls the Heart season six finale that has me hooked. I should say that the other thing of beauty in this film is the titular winter castle, Québec’s Hôtel de Glace. I wouldn’t pay money to sleep on an ice bed, but the place impresses, and the movie at least shows off as much as it can. You’ll probably get better views with a tourism video, but you won’t get McGarry’s eyes.