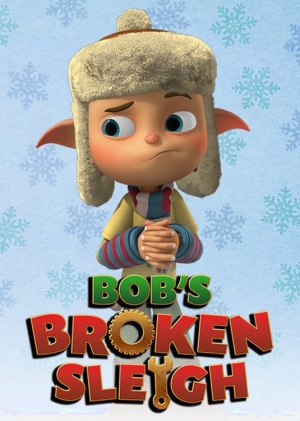 Throw Bruce Greenwood and Victor Garber in a movie and I’m sure to watch it, even if it is a below-average animated TV Christmas special. Greenwood, sounding like he could run a small time crime ring, voices Fishface, a gnarled puffin who’s so bad he doesn’t even get coal in his stocking. He’s made it his mission to ruin Christmas and enlists the help of two dim mini-puffins. His plan is to steal Santa’s sleigh and prevent him from delivering presents, thereby ruining the lives of little children, and presumably animal children, everywhere.

Meanwhile, back at the North Pole, Bob (Cole Howard) is having a rough time. He’s a magic-less elf and tries to compensate with nifty inventions, none of which turn out quite as planned. He’s even been relegated to reindeer poop duty – he’s the “poopervisor” – because there’s not much else he can do to help with the holiday preparations. All this has made him the butt of elf jokes. When he tests out a new engine for the sleigh just two days before Christmas, he ends up crash landing somewhere far from the North Pole.

There he discovers a talking trout named Fluffy, snootily voiced by Garber. This landbound, fur-lined vest-wearing fish has some airs, and I’m surprised he doesn’t smoke a pipe as well. The two partner up and try to get the sleigh back in time for Christmas Eve. Along the way, they meet Blue, an easily frightened furry creature, and Wupsy, a cheery cat with an overactive whip of a tail.

The animation is not much to celebrate, and the filmmakers use whatever is the equivalent to green screen. I tend to knock off points when animated fantasies don’t make an effort to create a unique magical world (talking animals don’t count). Even if it is in the details – a sprawling toy production line or cute and cozy elf hole, it helps the movie stand out. Bob’s Broken Sleigh is lazy with its backgrounds, which might as well be pulled from a clipart catalog.

They make up a few points with messages about appreciating others for their differences and about believing and trusting in yourself and your abilities. There’s also a good lesson about respecting everyone, something that seems lost on many of these not so holly, jolly elves. The overriding message, however, is that Christmas is all about the presents. Yes, that’s right, kids. Without the sleigh, Santa can’t deliver toys, and if children all around the world wake up present-less on Christmas morning, they’ll be in such a state of despair that it will destroy the Christmas spirit, possibly leading to the cancellation of Christmas – forever. Not exactly uplifting, especially since I just finished watching How the Grinch Stole Christmas, which does a lot more to get you in the holiday mood.