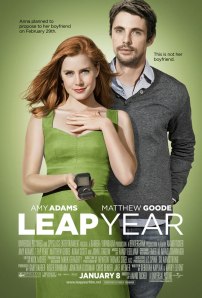 I shouldn’t like this movie as much as I do. It teeters precariously on an absurd premise and cobbles embarrassing stereotypes that work best with American cruise ship audiences bound for Ireland (I’m talking to you, Mom). But Amy Adams and Matthew Goode do that thing where they charm you into believing, if only for ninety minutes, that a girl can bump into a gorgeously single pub owner who will shepherd her across the country and that, despite their initial animosity, they will fall perfectly in love.

And isn’t that the definition of a successful romantic comedy? You can forgive certain transgressions, Anna’s (Adams) reason for traveling from Boston to Ireland, for example. She expects a proposal from her long-term boyfriend, but when she doesn’t get her ring and he flies off to Dublin for a cardiologists’ conference, she decides to take her chances on ‘an old Irish tradition’. Having confirmed this superstition with Google, she believes that a man must accept a proposal if a woman asks on February 29. For once, meeting an anonymous radio call-in guest at top of the Empire State Building on Valentine’s Day sounds reasonable.

You might also overlook the series of unfortunate events that threatens Anna’s itinerary. She gets delayed, rerouted, and stranded – and that’s before she even meets Declan (Goode), said pub owner. He agrees to taxi her to Dublin only because he needs a tidy sum to save his business from closure.

Their journey rests in the very capable hands of Adams and Goode. While the Irish countryside gets a strong supporting role, the couple squeeze every ounce charm out of a routine script. The enigmatic Adams somehow projects an Anna who is commanding but insecure, smug yet winsome. It’s not her cleanest performance, but she articulates insults and sympathy with such bewitching sweetness. To hell with consistency.

Nor is Matthew Goode wasted. He may be more effective in weightier fare (A Single Man, Brideshead Revisited), but he is an able romantic lead. He neither overshadows his partner nor recedes into the background. His Declan looks and feels like he’s been hand washed a few times, a suitable contrast to both the perfectly coiffed Anna and her dry cleaned fiancé.

So yes, what I’m saying is, sometimes all we want is a little scruff to warm our hearts.