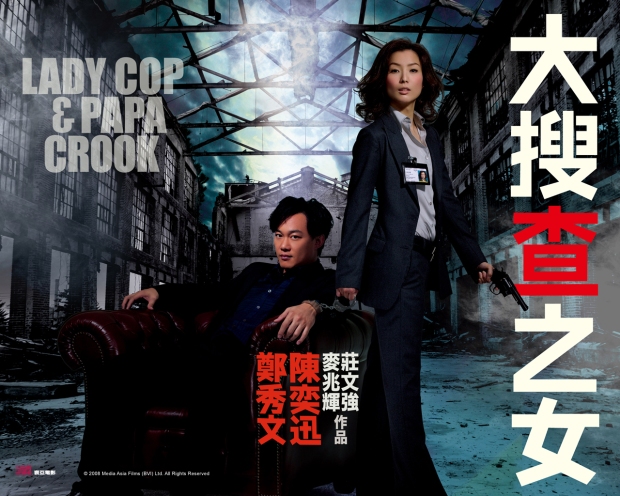 Alan Mak and Felix Chong (Infernal Affairs trilogy) join forces again to create a true mystery that will have audiences wondering what the hell is going on in their film Lady Cop and Papa Crook. ‘Tis anyone’s guess because it doesn’t seem like the writing and directing team have a handle on it either. The movie sounds good in theory – so many do – but ultimately suffers from numerous inconsistencies and general dullness of character and plot.

The story pairs Sammi Cheng as lady cop Maureen Szeto and Eason Chan as papa crook John Fok. Maureen is a detective who, when she’s not taking down criminals, worries that she is frittering her life away with her artist boyfriend (Conroy Chan) of ten years. She crosses paths with John when she leads the investigation into his son’s kidnapping, which is complicated and/or caused by the fact that he runs an illegal diesel operation.

Mak and Chong wanted to explore the dramatic tension generated when cops and robbers are thrown together in a confined space, so Wikipedia tells me, and the story has potential to match their darker dramatic efforts, but with Cheng in the lead, the film could have also veered towards the comedic. Instead of settling on one or attempting a coherent balance, however, the filmmakers use all the tools in the box and send the movie’s tone ricocheting from one end to the other. In the space of five minutes, John’s associates commit a brutal murder that feels like something out of Election only for Maureen to crawl into the screen on all fours à la Love Undercover a few scenes later.

It’s hard to know what to take seriously, and it doesn’t help that the two leads don’t seem to be acting together. When Cheng and Chan share screen time, it’s as if they’re drawing from two different scripts, and both leave the scene looking a little helpless. Thankfully, the story avoids pairing the two characters in a romantic relationship, though both actors still lack chemistry with their onscreen partners.

Others try to fill in the gaps; Patrick Tam delivers a particularly juicy cameo as a competing triad boss, and Liu Kai-Chi also makes the most of his memorable role as a fiery member of John’s inner circle. But even as performers flare up individual scenes, the fire quickly fades, and the sum of their performances never adds to the tension and urgency of what should be a heart-pounding thriller.

Some might blame the film’s mediocrity on Mainland censors, which sliced six minutes from the original cut. I’m guessing this was due to a subplot involving the death of an officer’s wife and child, thus causing him to act in a vengeful and not entirely upstanding manner. Since I watched the director’s version and didn’t feel like sitting through the theatrical release, I don’t know how many holes were punctured in the plot. But we can probably agree that the censors don’t tend to improve on a film.

If the film does earn any points, it should be for featuring a relatively competent woman as a lead investigator of a major crime. Cheng still dips into her screwball comedy tricks bag and acts unprofessionally on several occasions, which the filmmakers decide to blame on female issues like pregnancy and a cheating boyfriend. (A fellow male officer asks, “You have shit for brains or PMS?”) However, Maureen is clever and gets the job done despite being a bit flighty. The movie also goes above and beyond, by Hong Kong standards, and features Michelle Lo in a visible supporting part as another member of the investigation. It’s too bad Michelle Ye, who plays John’s pregnant wife, doesn’t do much except get really emotional. Girl, I feel you.

I Love Hong Kong lives up to its title, showing great holiday affection for the city and the salt of the earth folks who live there. A respectable follow-up to the previous Chinese New Year’s hit 72 Tenants of Prosperity, this movie delivers a warmhearted message about community that comes wrapped in layers of laughter, nostalgia, and product placement. This TVB production is also top heavy with local television actors, but the station opts for true screen stars Tony Leung Ka-Fai and Sandra Ng to generate a hefty festive buzz.

Leung and Ng play parents to Ming (Aarif Lee), Chi (Mag Lam), and King (Chan Wing-Lam), and life is all fun and games until hard economic times brings big changes to their lives. Shun, a toy manufacturer, finds his factory shut down, so he decides to move the family back to the public housing estate where his father (Stanley Fung) still lives. But this ends up literally cramping everyone’s style.

Though Shun praises the virtues of being close to extended family and having trustworthy estate friends nearby, no one cares for this arrangement. Shun’s Wife (she doesn’t have a name but is simply known as ‘Shun’s wife’) escapes by returning to work at a beauty clinic, only to find herself demoted and taking orders from a haughty and much younger, taller, slimmer superior (Koni Lui). His son, a cog in the Food and Health Department machine, objects to living next to the stall owners he’s tasked with reprimanding, and even Shun’s father prefers having his flat to himself, where he has space enough for two TVs – a bigger one for TVB and a smaller one for that other station.

It’s Shun’s turn to feel upset though when his former friend Lung (Eric Tsang) reappears. He still holds a grudge from their youth after some funds went missing and wonders if Lung is just here to pull another scam or if he really wants to help out the struggling tenants. The power of flashback not only fleshes out their relationship and helps the audience appreciate the values of council estate living, it also gives a boatload of fresh faced TVB actors a chance to play younger versions of the characters (Bosco Wong as Shun, Wong Cho-Lam as Lung, Kate Tsui and Joyce Cheng as the bread store twins).

The gimmick aids plot development but also strengthens the message of Hong Kongers coming together to fight off the wealthy and corrupt, something we apparently did better thirty years ago. By the time the movie reaches its forced climax, you’ll be cheering on the small potatoes of this idyllic housing estate as they take on officials and developers who threaten their community and simple way of life. Hell, you might even want to live in a housing estate after you see their polished quarters. Zany side plots made funnier with a knowledge of Cantonese and Hong Kong gossip top off this stocking stuffer of a film, but the overall effort works regardless. It’s one you won’t mind revisiting next Chinese New Year’s.

“I Love Hong Kong” performed by Aarif Lee and Mag Lam. Video not available but inspired by “Kowloon, Hong Kong” by the Reynettes: 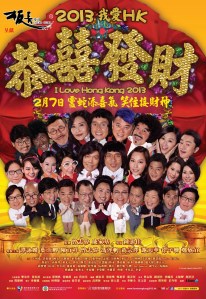 Recently, Hong Kong’s go-to television station, TVB, has had a decent track record delivering satisfying Chinese New Year’s fare. This effort doesn’t quite live up to the lofty expectations set by its predecessors, like 72 Tenants of Prosperity and the 2011 installment of I Love Hong Kong, but still manages to tick off the appropriate boxes. There are sophomoric slapstick gags, local jokes for those in the know, a bit of song and dance, conspicuous product placement. The network also imports a few big name actors to balance out the surfeit of TVB extras. These movies are meant to be a paean to the common folk, the ones most likely to fill the seats, and a bevy of artistic contributors have scraped together a simple plot that churns up warm feelings but does not tread too heavily on the intellect.

It’s a timeless Hong Kong tale of the small potatoes getting mashed by villainous property developers. Sung Chi-Hung (Alan Tam) is the poorly coiffed but genial owner of a neighborhood dim sum restaurant. His wife Yeung Yeung (Veronica Yip) thinks he’s a little too charitable though and that he considers the needs of his employees and customers before those of his family.

On Chinese New Year’s Eve, she rallies her sons and daughters-in-law to trick Chi-Hung into selling the restaurant, which seems like a way to earn bad karma for at least a year or two. When he still refuses to sell, they desert him in a huff. Feeling neglected and inadequate, he decides to throw himself off the roof. He is saved just in time by an angel in the form of Eric Tsang (TVB archangel in real life), who guides Chi-Hung into the past in a low-budget Christmas Carol sort of way. Our desperate hero begins to recall the decisions that led him to his current predicament.

The movie goes into an extended flashback and stays there until the last 15 minutes or so, which is to say the audience sees a lot more TVB actors than Alan Tam and Veronica Yip. Bosco Wong and Kate Tsui fill in as the younger 1970s versions of Chi-Hung and Yeung Yeung, whose initial pairing finds resistance with a few people. Her wealthy father (Hui Siu-Hung) objects to his daughter dating a restaurant lackey while Chi-Hung’s insincere friend Ha Shek-Sam (Michael Tse) wants Yeung Yeung for himself. Of course true love endures, despite their machinations. What doesn’t run so smoothly is the restaurant, which constantly faces the threat of going under. Chi-Hung’s honesty and/or naïveté saves the employees and owner (Stanley Fung), but increasingly at the cost of his growing family’s needs and comfort.

The movie crescendos to an uplifting finale but is longer on nostalgia and shorter on humor than TVB’s previous holiday films. The warm 1970s sheen of the piece does not enlighten on the past or present but is used to bolster the audience’s Hong Kong sentiment. It is a giant cinematic trinket displayed to reassert the city’s identity. And indeed there is some not-so-subtle identity politics when the restaurant changes owners; everyone is assured that nothing will change in 50 years, and we know how that’s working out.

Mostly, the mood is dampened because the film is just not particularly showy or fun. And because a blackfaced character is still being played for laughs in 2013. The musical numbers are perfunctory and put the stylized set to waste. Also, the premise of a family turning against itself is a bit mean spirited, regardless of the outcome. There are a few entertaining performances. This isn’t the stuff of drama school, but Michael Tse and Joyce Cheng as Shek-Sam’s accidental love interest make an energetic pair. Some would call it overacting, which it is, but one can indulge during this time of year.