These are two emotionally stunted would-be lovers in Joe Ma’s Fighting for Love. Tung Choi (Tony Leung Chiu-Wai) and Deborah (Sammi Cheng) bark, claw, and kick at anyone who stands in their way, and they even have a go at each other in the first few minutes. Their mutual disregard for the rules of the road ends in a 999 call, and it’s not the last time they meet.

Of the two, Deborah is more churlish, the coworker who turns the room to ice the second she steps in. Spitting abuse left and right, she leaves a wake of shattered self-confidence as she strides into her office. Deborah’s home life doesn’t fare much better. Her older sister tolerates her while her dad, with whom she lives, only speaks to her when he wants her to walk the dog.

Tung Choi has a warmer relationship with his family, by which I mean they often engage in heated arguments that involve screaming and throwing things. They have the brassy edge of the nouveau riche; not only do they own a successful chain of tripe restaurants (where they serve “2000 bowls of cooked bull organs a day”) but their father also won the lottery, twice. Tung Choi’s harpy family might explain why he’s also pretty insufferable. Though his insults are not as calculated, he can be surly and snappy on a turn.

In short, the two perfect for each other. But rather than teasing out their combative flirtation, the movie takes a poorly planned shortcut. Deborah’s determination to get compensated for the fender bender leads to an early confrontation in a karaoke room. The tension is quickly defused when Tung Choi shows up drunk, and before you know it, they’re snuggling and smoking in bed.

Their one night fling isn’t surprising, but Deborah’s inexplicably sweet demeanor afterwards is. She’s suddenly calling her former foe and teasing three certain words out of him. Tung Choi, also a little confused as to whether she’s in earnest, plays it off but finds himself falling for Deborah’s frankness and fortitude. That makes more sense because she’s a contrast to his manipulative television personality girlfriend, Mindy (Niki Chow), who gradually proves herself to be more of a pill than her rival.

Cheng is incredible to watch and harnesses the power of playing against type. Even as the script pulls her in several directions, Deborah comes off as a real and understandable character. She may not be entirely likable by film’s end, but she doesn’t make excuses and she takes advantage of chances to redeem herself. Tung Choi runs into her after she’s gotten fired and kicked out of the house and ends up sleeping on a hospital room floor. Cheng is full of pathetic bluntness as Deborah explains what’s happened, her face filled with recognition of her own failings rather than with self-pity.

Even with a similarly nuanced performance by Leung, however, this movie never finds its groove. It echoes of a talky, comedy-drama independent. The film is fronted by two people who don’t really know how to have relationships but are prepared to acknowledge that and try anyway. It’s a sometimes clever and funny script that aims for realism of life and love, but ultimately, it can’t overcome its lack of narrative discipline and ends up being a disjointed star vehicle.

“Doctors and Me” (醫生與我) – theme song by Sammi Cheng:

“That Day, Were You Happy” (那天你愉快嗎) by Sammi Cheng:

“Keeping Watch Over Our Love” (守望相愛) by Sammi Cheng

Chris, a seasoned beat officer, explains to his new partner on her first day, “Wanchai is a chaotic district. There’s lots of traffic, lots of people, and lots of mentally ill.” Somewhat taken aback, she says that it would be dangerous if they all went crazy, to which he replies, “When I get mad it will be even more dangerous. I can pull out my gun and shoot everyone.”

Lest anyone think that Hong Kong police officers are trigger happy, hypothetical talk about firing a weapon generally stays that way. That’s not always the case when it comes to Hong Kong movies where bullet ballets are a staple. Crazy N’ the City is a vast departure from the dark and highly stylized gangs and guns mayhem though and much of the pedestrian action takes place under sunny skies.

The natural light illuminates the city and characters in a way that softens their harsh edges. Chris (Eason Chan) has grown dejected over the years and is skeptical when rookie Tak Nam (Joey Yung), or Manly, bursts into the department with the enthusiasm a superhero’s sidekick. She attacks her first case, a suspected cat poisoning, with gusto but as the day wears on, finds that her partner has a more apathetic approach to the job.

The movie has a similar unhurried feel, and the camera lingers around the two as they encounter the ordinary and uneventful. Manly helps an old lady push her trolley full of cardboard up a hill guarded by a kid with a water gun. A shop owner suspects a man (Lam Suet) of stealing milk formula. Two teenage girls witness someone exposing himself on the bus. A mentally ill man, Shing (Francis Ng), raids a bra shop. A young woman from the Mainland (Zhang Meng) opens a small massage parlor.

Director James Yuen allows his film to unfold organically. His characters swim in and out of the picture, leaving little splashes and sometimes crashing waves across the narrow streets of Wanchai. It’s a far richer portrait of Hong Kong than we’re used to seeing, and that’s what makes this little film so gratifying. There is a tenderness to the way each character is crafted, the way this tiny square of the city is painted to life. Yuen’s camera shows a closeness that is intimate without being claustrophobic.

People and places brush up against each other, sometimes leaving callouses and sometimes adding polish. Over the course of the movie, Chris blunts Manly’s idealism but in a way that helps her to become a better officer. “We’re policemen not supermen,” he explains. Meanwhile, her dedication gives him license to become more invested in his job. He also gets some help from a serial killer subplot that has a bit of an artificial ring to it, shifting the movie into conventional crime thriller territory.

But Ng, whose character Shing figures prominently in that storyline, gives an emotionally charged performance that makes the generic diversion worth it. He also earns points for sensitively drawing attention to mental illness. His costars, both of whom hold Ph.Ds in histrionics, are affecting as well, giving nuanced, unpretentious portrayals. Yung shows she can act when she’s not trying to blast her way through a scene and handles Manly’s conflicting emotions with well earned sympathy. But Chan is the film’s greatest asset, capturing Chris’s mix of idealism, disappointment, and insecurity from scene one. He is exceptional to watch and betrays his character’s thoughts with the slightest physical details. Hong Kong film would do well with more of this Eason Chan and this kind of movie. 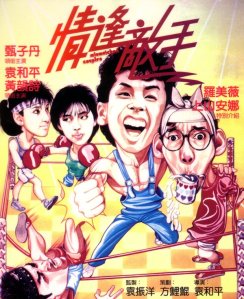 If you buy the Mismatched Couples DVD, you’ll find that distributer Fortune Star markets it under its “Legendary Collection,” which is only fitting because this is a true Hong Kong classic. For what it’s worth, which isn’t much, this is my favorite Donnie Yen movie. His second acting credit bears little resemblance to the severe no-nonsense ass-kicker most people think about when they see his name. Instead, his character in this movie, Eddie, is a mild-mannered college student who wears guyliner and just wants to break dance.

And who knew Yen was a dancing machine? I lament the light comedies that were not made in favor of Iron Monkey and Once Upon a Time in China II, spectacular as those films are. Yen along with costar and director Yuen Woo-Ping start the party off right and never really let up. The first few scenes feature nearly back-to-back acrobatics, making use of both their prodigious martial arts talent. Eddie has probably one of the best wake-up routines on screen and Mini, Yuen’s character, springs to life by waving around a bunch of sugar cane.

Their flexibility opens up a wide range of physical comedy. After Mini loses his job as a street vendor, Eddie invites him home where he lives with his uptight and single older sister Ah Ying (Wong Wan-Si) and cousin Stella (May Lo). Ah Ying doesn’t approve, and this leads to another memorable sequence in which Eddie and Stella try to hide their new friend in their tiny flat.

She reluctantly gives in, and the mismatched coupling storyline begins to take shape. Ah Ying tries to keep her affections for Mini hidden beneath her harsh demeanor while Stella is a little more forward with her feelings for Eddie. He, however, prefers Anna, maybe because she’s rich and can really rock a cherry leotard.

Most of the enjoyment doesn’t come from the plot though, which is pretty generic even if the actors inhabit their roles well. Both Wong and Lo bring out their characters’ personality and temperament in ways that make them more appealing than they are on paper. The real fun in this movie comes from Yen’s boundless energy, resulting in one goofy dance episode after another. Yuen and his action director/brother, Brandy Yuen, end up with something like a long narrative music video, replete with high tops, tracksuits, boomboxes, and sometimes tracksuits with a built-in boombox.

It isn’t until the end that the act gets a little tiresome, with a superfluous fight scene featuring a more familiar Donnie Yen. The only other issue I had was the characterization of Lynn (Chan Wai-Lin), a female body builder who’s used as comic relief and whose own romantic intentions are deemed laughable. Otherwise, this is one not to miss.

Donnie Yen being all kinds of awesome: