Every generation deserves a good Faust retelling, and Bedazzled is not one. A remake of a 1967 film by Peter Cook and Dudley Moore, this millennial version sees Elizabeth Hurley as the seductive Devil and Brendan Fraser as the hapless mortal who toys with eternal damnation. There is plenty of material to be mined, but the film trades philosophy for stunts, reserving the core of the story for the last ten minutes.

The movie instead relies on a repetitive circle of literal wish fulfillment. Elliot Richards (Fraser) is a socially awkward IT assistant, the kind of guy who tucks his sweater vest into his pants and doesn’t realize that his coworkers aren’t busy but just trying to avoid him. When another painful night of social rejection ends with a dismissal from Alison (Frances O’Connor), the woman of his dreams, he wishes aloud that he might be luckier in love. Out pops the Devil in all her slinky glory to help Elliot do just that. It’s not so much his happiness she has in mind though. She easily tempts him to sign away his soul in exchange for seven wishes. After bungling his first on a lousy McDonald’s order, he gets down to business, confident that he can finally find true love with Alison.

The film proceeds to cycle through Elliot’s wishes, all of which get thwarted in some way by the Devil. Seeing his low status amongst his coworkers, he desires wealth and power, which he gets in the form of a South American drug lord. When he wishes that Alison was his wife, he forgets to add love into the equation, and she cheats on him with a younger, more oiled up lover. Elliot picks up on the Devil’s game and learns to tweak his wishes but to no avail. He eventually gets what he wants when Alison can’t keep her hands off him, but he gets a few surprises himself that cause her to reconsider any sort of relationship.

Each wish is a chance for Elliot to grow, and Fraser shows some of the frustration that turns his character into a more generous person, but Elliot was never in need of a great transformation. He was just an eccentric guy desperate to make friends. If anyone needed a change of heart, it was his coworkers, and of course the Devil, who we’re never really sure what she wants to do with all those souls. The moral dilemma that the Faust story provides loses its potency with a tame, good-hearted protagonist and a goofy merry-go-round of wishes. Elliot’s imagined scenarios, some of which are a bit off color for 2016, skip along mostly for laughs until the game is up. Though Fraser and O’Connor are adept at switching up their roles and even Hurley manages to seduce with her perfect teeth and flawless skin, the movie is first, a mismatched battle of wits and second, a belated morality tale. 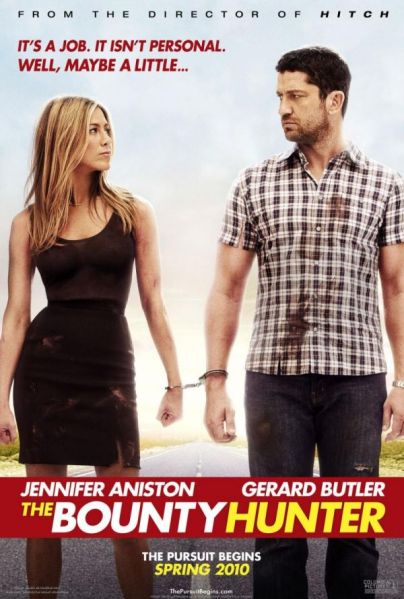 The Bounty Hunter, much like actual bounty hunting I assume, is a messy affair that stretches the bounds of credibility and takes off in a hundred different directions. It gets you somewhere, but you might go screaming and kicking along the way. That’s because this is one of those romantic comedies both roundly derided by critics and garlanded with multiple Razzies.

Well, rotten tomatoes be damned because I liked this movie about as much as I was prepared to dislike it, which is to say a lot. I won’t be adding it to any “best of” list, but it is a thoroughly enjoyable romp that’s a welcome alternative to the sedate romantic movie night in. An energetic action-romance-comedy, it embraces all its genre tropes to the point of predictability yet still finds a creative spark in its execution.

Investigative journalist Nicole (Jennifer Aniston) and ex-cop turned bounty hunter Milo (Gerard Butler) are a divorced couple still at each other’s throats. He tries to bring her in after she skips a court appearance and bail is revoked. But when her instincts lead her to a possible murder at his former precinct, they have to figure how to work together rather than how to constantly unhandcuff themselves from bedposts. The relatively straightforward plot turns into a free-for-all, however, when at least a half dozen supporting characters parachute in and out as bondsmen, bookies, and snitches. Before long, it’s not just a story about the couple pursuing a possible murderer and crooked cop but also about evading gambling debts and delusional lovers.

At many points, the film just turns into a frantic chase, through a golf course, through a tattoo parlor, through a strip club. You’re not really sure who’s after who, and one crony is just as good as any other. But the chaos hums along thanks in large part to an unrelenting cast. They dive into the absurdities so whole heartedly that I couldn’t help but jump on for the ride.

Aniston and Butler make an explosive team and are appealing whether together or apart. Having betrayed my generation by never watching Friends, I finally understand Aniston’s star power. She’s a clever actress, asserting herself physically and emotionally as Nicole. Instead of walling off different sides of her character, she manages to be at everything at once, a dedicated journalist batting away obstacles and a lover cognizant of her own shortcomings. Butler also impresses by lifting a generic role into a character I could love and hate. It was satisfying to see Milo get tased in the neck after chucking Nicole in his trunk, but it was also easy to forgive him when he admitted his romantic feelings, albeit while ducking debt collectors who were using his ex-wife as collateral.

The supporting roles don’t go unappreciated either. Jason Sudeikis milks his scenes as Nicole’s obsessive coworker who takes it on himself to protect her from Milo. Christine Baranski and Cathy Moriarty both add dramatic flare as Nicole’s mother and a snarling bookie, respectively. Everyone gets their chance to add their own brand of eccentricity to the film, and the sum effort somehow works.

It occurred to me while watching this movie that romantic comedies are a lot like bridesmaid dresses. Occasionally you come across one that you can bring out again and again no matter what the occasion, but most are unsightly things that manage to serve its purpose and then should never be seen again. 27 Dresses falls into the latter category. A lackluster romcom that wears like a drab shift, it hangs limply on an uninspired and disjointed script, vainly hoping that attractive stars and overtures to fairytale weddings will give it life.

The film tries to revolve around Jane (Katherine Heigl), a woman who knew she was destined to be a bridesmaid from a young age when she rescued a relative from disaster on her big day. Twenty-seven weddings and many years later, she still hasn’t lost her love for love’s big day. But even as she sees her friends off in wedded bliss, she remains single, pining for her boss, George (Ed Burns), who mistakes her devotion for superior administration skills. Her best friend (a delightful Judy Greer) has it right when she gives Jane a crisp smack in the face after one too many teenage bouts of infatuation.

I say the film tries to revolve around Jane because plot and message get tangled as more people enter the picture. Jane’s perfect sister, Tess (Malin Åkerman) arrives for a short visit but ends up staying much longer when she becomes smitten with George, lies about her love for tofu and dogs to earn his affection, and gets engaged. Jane is helpless to stop the whirlwind romance and is resigned to playing the sacrificial lamb. Meanwhile, an interloper offers a sometimes sympathetic ear. Kevin (James Marsden) meets Jane as she shuffles between two weddings one night. A writer for the style pages, he aspires to report on real news and sneers at the institution he writes so eloquently about.

The film juggles two romances but doesn’t have enough hands to keep up with both. The story bounces around between ideas of infatuation, betrayal, and loyalty, not appreciating the fact that Jane and Kevin are the ones giving the film structure. Her optimism balances his cynicism. She gives an impassioned defense of weddings that is a mission statement for romcoms everywhere while he offers a moderating influence on their excesses. Though it’s clear who has the winning argument, the joy of marriage that prompts Jane to wear her twenty-seven dresses and to grudgingly plan her sister’s wedding is nowhere to be found. Even as Kevin warms to her pure-hearted perspective while surreptitiously writing an exposé on the perpetual bridesmaid, you simply have to take his word that’s there’s something deeper to all this, that maybe true love is by itself all you need. Don’t trust the film to show you what it looks like though. While Heigl and Marsden are serviceable in their roles, there’s little in the way of actual love, not in the brief nuptials, not really between either couple, and not amongst Jane’s friends and family.