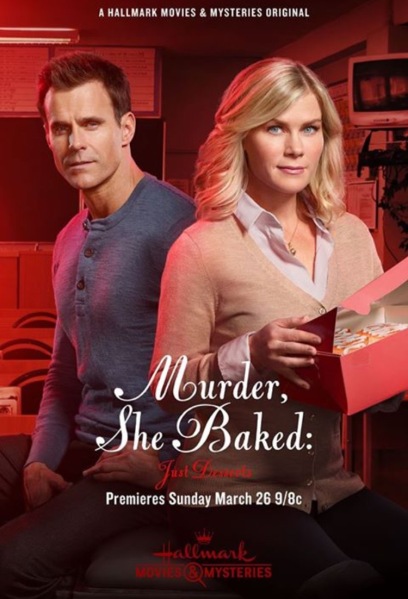 Hallmark’s Murder She Baked series about Hannah Swensen (Alison Sweeney), baker-sleuth, is starting to show signs of wear and tear. After a lackluster fourth movie, this fifth installment improves on the romance but falls short on the murder and the baking. The case centers on Eden Lake’s high school basketball coach, who is found dead on school grounds. There is no shortage of suspects, from his unhappy wife to members of the team, since the victim seems to have amassed quite an enemies list. Complicating matters is a televised baking contest hosted by Hannah. When mysterious accidents start happening to her and other members of the judging panel, of which the deceased was a part, she wonders if the bake-off is the real target.

Viewers might be thinking the same thing since all those sweetened treats are nowhere to be found. While I’m not expecting Great British Bake Off levels of cakes and cookies, they did make the show appealing and different from others. What we have here though is a whodunit about a baker hosting a baking program in which no one seems to bake. Even the goodies that Hannah is so fond of delivering around town remain boxed up. The only indication that this is part of the Murder She Baked series are some KitchenAid mixers and talk of spilled flour.

Just Desserts might as well be any other murder mystery. Technically, the case is well mapped out, but it’s also sterile and uninteresting. I had a hard time distinguishing the characters. There’s the record-breaking star player and the second string lookalike, several women who could substitute as mothers or wives, and some shifty white dudes just hanging around. None were compelling enough to earn my sympathy and make me wish for their arrest or vindication. Also without the sugar high of a delicately whipped crème pie or pastel mound of macarons, there was little to brighten up the story. Despite its late March premiere, this is a movie better suited for a dark winter night.

The one area where it does redeem itself is the unresolved romance between Hannah and her two suitors, police detective Mike (Cameron Mathison) and dentist Norman (Gabriel Hogan). After much teasing and indecision, she finally chooses a partner, though not before both get one more turn at proving himself to be the more attentive and valiant man. In particular, Mike, a widower, wrestles with some emotions that give his interactions with Hannah some punch. Also, he’s finally stopped treating her like a misguided adventure-seeker and instead is starting to recognize the skills she does bring to each case. They share a tentative relationship I would like to see explored going forward, but the story inexplicably pushes the romance up the timeline. That could end up working in the series’ favor though because future films will have a very new dynamic to work with.